Cardi B And Offset Married In Secret Last Year, Okurr!

AugustLiveGh June 27, 2018 Comments Off on Cardi B And Offset Married In Secret Last Year, Okurr! 840 Views

Cardi B wasn’t joking about that whole invasion-of-privacy thing.

The “Bodak Yellow” rapper and her supposed fiancé Offset, who are expecting a child together, are actually already husband and wife, according to a marriage certificate obtained by TMZ.

The certificate was filed under their legal names, Belcalis Marlenis Almanzar and Kiari Kendrell Cephus, on Sept. 20, 2017, in Fulton County, Georgia, where they both currently reside.

Cardi B confirmed that they’d secretly wed in a note released Monday on Instagram that talks about “moments that I want to keep for myself!” She explains that the two woke up one morning and decided to tie the knot in private with just her cousin as a witness.

“Our relationship was so new breaking up and making up and we had a lot of growing up to do but we was so in love we didn’t want to lose each other,” Cardi B wrote. “I said I do, with no dress no make up and no ring!” she added. 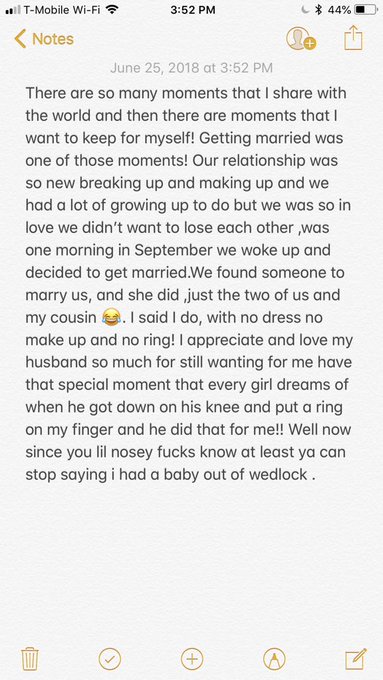 This why i name my album “Invasion of privacy” cause people will do the most to be nosey about your life .Welp fuck it .

“Well now since you lil nosey fucks know at least ya can stop saying i had a baby out of wedlock,” she ended in the note in peak Cardi fashion.

The Migos rapper seemingly proposed to Cardi B on stage at a Philadelphia concert in October last year with an 8-carat diamond ring, but now we know they’d already been married for weeks at that time.

At the BET Awards on Sunday night, Offset referred to Cardi as “my wife” on stage while accepting the trophy for best group.

“Thank God, I thank my wife, you should thank yours,” he said in his short but sweet speech, standing alongside Takeoff and Quavo.

Having collaborated on a song together in 2016, Cardi B and Offset reportedly began seeing each other the following year ? their first date went down at the Super Bowl. After the quasi-proposal eight months later, Cardi revealed she was pregnant during a musical performance on “Saturday Night Live” amid rumors that she was expecting.

“I’m finally free,” she said backstage after performing her new single “Be Careful.”

She later revealed that a baby girl was on the way. But she has kept the child’s name a secret, noting that Offset was the one who chose the name.

The two appear together on the latest cover of Rolling Stone magazine with a photo of the “Bad and Boujee” rapper kissing her pregnant belly. They opened up about their “hip-hop love story” in the accompanying interview.

“We really love each other. She’s real. I wanted real. I also wanted successful,” Offset said of his wife.

“We work. With a day off, we’ll be in bed all day, just enjoying each other’s company. It ain’t about going to no movie, no dinner, nothing. We can go eat McDonald’s or Wendy’s. She might want a chocolate Frosty,” he added. “We done so much bizarre shit with each other ? rings and cars and chains. We got that out of the way.”